Prior to owning & directing PSE, David began his career in the Refrigeration and Air conditioning industry over 30 years ago at Star Refrigeration in Glasgow, Scotland. He completed his apprenticeship and attained his City and Guilds certificate (E.I.T.B J01 & J03 - Engineering industry training board) together with a Diploma in Business Studies. In 1989, David took a Project/Contract management role with Star Refrigeration & Four Air Industries in Melbourne, Australia. David took over the Operations at PSE as Managing Director in 1992 – where he has passed on his wealth of experience in the industry to build a team of multi-skilled mechanics to service the Refrigeration and Air conditioning industry. 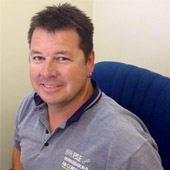 Dean began his career in the Refrigeration and Air-condition industry 25 years ago as an apprentice at FourAir industries, where he quickly worked his way up to Company Service Manager. He left FourAir to join PSE in 1994 as Project Manager, where he showed his ability to manage & deliver on high valued projects. Dean became a Director at PSE in 2004.